The term “nature” has become closely linked with lifestyle. A complex system, of which we are a physical and biochemical part, is reinterpreted as a place for escapism. Our desire for an ideal world ironically leads us to those places that are increasingly impacted by our way of life. Which is actually an uncomfortable thought. But why can’t we escape this dilemma? An exhibition at the Temporary Gallery TALK TO ME – OTHER HISTORIES OF NATURE in Cologne is looking for clues. As its artists argue, it is the completely objectified relationship to nature that only allows the human view from the outside that lies at the heart of the problem. This practice of seeing and understanding meticulously classifies, names and categorizes every living being, but it blocks the permission of any impulse, vibration, or voice from the opposite direction. In a broad choice of media forms, TALK TO ME designs artistic strategies that investigate the relationship between humans, ecosystems and living beings beyond the classic dichotomy of human and nature. The agency to communicate is handed over to the non-human speakers.

The project was developed in cooperation with students, researchers and alumni of the Transmedia Room of the Academy of Media Arts in Cologne (Kunsthochschule für Medien Köln – KHM). Based on the example of the Natural History Museum, the positions examine the artificial distance that is built up in institutional, scientific and social contexts between living beings as objects on the one hand and humans as viewers on the other hand side. By proposing new modes of experiencing and understanding nature, the seventeen positions release the objectified animal or element of nature from the chain of insights that embeds it in man-made orders of knowledge and viewing habits. One of the works that explores this relationship between the human-viewer, who is allowed to look at the animal as an object, most closely to the approach of the exhibition is the film work Koenig der Tiere by Lisa James. The artist has shot a 16mm film of the dioramas in the Koenig Natural History Museum in Bonn, in which she examines the respective species almost detectively, which are shown stuffed in glass boxes decorated with plants that imitate their natural habitat. In addition to the close-ups of the prepared animals, information is displayed that informs about the origin of the animal, its way into the collection and the conservation status of the species. In her neutral investigation, the artist clarifies that the history of these animals is far from over. Her film conveys a vague premonition that the human need to subject animals also changes our fate.

Sometimes even in a submissive form of confrontation between human and animal both sides approach each other. In his video Wild Man has a soft Lure Thomas Hawranke pursues this idea in an almost humorous way. Hawranke has entered the scene of American hunters and hunting experts who make and use lifelike imitation wild birds such as Canadian geese or ducks made of plastic. The film portrays a huge industry whose products are supposed to control the behavior of the animals in a way favorable to the hunter, but which create a strange situation, in which “real guys” end up fusing with the animals through their close observation and imitation. By reaching into the depths of large rivers channeled by man, the Thames and the Rhine, the artists Pascal Marcel Dreier and Anton Linus Jehle embark on a completely different form of searching for clues. With bone fragments from the mud of the Thames, which are neatly lined up like in an archaeological exhibition, and the handlebars of a sunken e-scooter (We are Climate neutral), which rest by the hundreds near Cologne on the bottom of the river, Dreier and Jehle each present very different relics from the rivers. The presentation of these civilizational artifacts reflects our unstable relationship with the rivers, which is deeply ambiguous and split between recreational area, ecosystem, garbage dump and shipping waters.

Starting from this great irregularity and inner dissonance that makes up our relationship with nature, other works come up with sensory approaches that allow an unbiased listening and experiencing of the environment. Based on the morphology of mosses of the Páramo ecosystem in Colombia, Jazmín Rojas Forrero has created the character “Bryophyta”, a human-plant hybrid. Particularly striking about this creature are its tubular hearing devices, which are inspired by macro images of the organs of the mosses and are modeled from ceramic and glass. A sound of gentle splashing of water that emanates from them indicates their function of enabling a new way of perception, in which man himself becomes part of his environment. In their theories, which they present in booklets, Corinna J. Duschl and Katharina Mönkemöller also pursue this principle of a complete reform of the sensual attitude towards nature, which breaks with previous approaches and opens up new channels of access. While Duschl uses her model of the “tentacular bodies” to design a novel sensory behavior that implies a complete transformation of the physical relationship of man to nature through the (metaphorical) development of new, hypersensitive organs, Mönkemöller pursues a form of “ecological mourning” by posting obituaries in the public space that indicate the disappearance of chestnut trees. This eco-social movement tries to establish a communally shared mourning culture that raises awareness for the extinction of living beings and habitats. In her publication, the artist combines references to endangered animal species with the mentioning of handicrafts that are threatened to die out.

Due to the subtle ways by which they decentralize the position of man in the structure of “nature”, the works in TALK TO ME – OTHER HISTORIES OF NATURE are often one step ahead of the viewer’s familiar point of view. As in the photo series The Skin of Species, which Kihuun Park shot on an exploratory tour through Korea and in which both random and strikingly portrait-like shots of stray cats, domesticated fish mix with fragmentary human-animal encounters, there is often a logic of its own at work in the encounter of the species. What Park calls snapshots of fleeting relationships in the world of living things, however, has a much deeper, somehow mysterious level. This inscrutability can also be encountered in Yve Oh’s sound installation In the Memories of Rivers, which is a synthesis of specific sensory impressions and experiences that the artist has made on extensive hikes along the banks of great rivers, including the Rhine. Oh recognizes in the river a powerful store of knowledge beyond space and time, which is connected to her fate and with which she tries to reconnect through the method of walking and the application of her five senses.

Have we humans perhaps underestimated the animals’ perception of the world? This question is becoming more and more pressing while walking through the positions. It is expressed above all in the video work The Backpack of Wings: Modern Mythology by Hyeseon Jeong and Seongmin Yuk, in which the artists design a futuristic, hyper-technoid world in which a huge company uses gigantic computing systems and data storage to source the sensory ability of animals to predict natural disasters. The viewer is repeatedly led to a kind of fountain in the center of the server landscape, which consists of dragons that let pearls glide from their mouths into frog mouths and is based on East Asian mythology, which attributes these predictive powers to animals.

The artists of TALK TO ME – OTHER HISTORIES OF NATURE show alternative ways of rapprochement in the relationship between man and nature, without coming up with a new, human-centered theory. Rather, the positions weave a web of starting points for an expanded narrative that emanates from nature and that may eventually be connected. To present a romanticized vision, as commonly embodied in the notorious “voice of nature”, is clearly not the goal of the exhibitors. And yet the works sharpen the perception of the noise with which we drown out all those complex signals and vibrations that we actually do not understand anything about. In our claim to all-encompassing knowledge of nature. 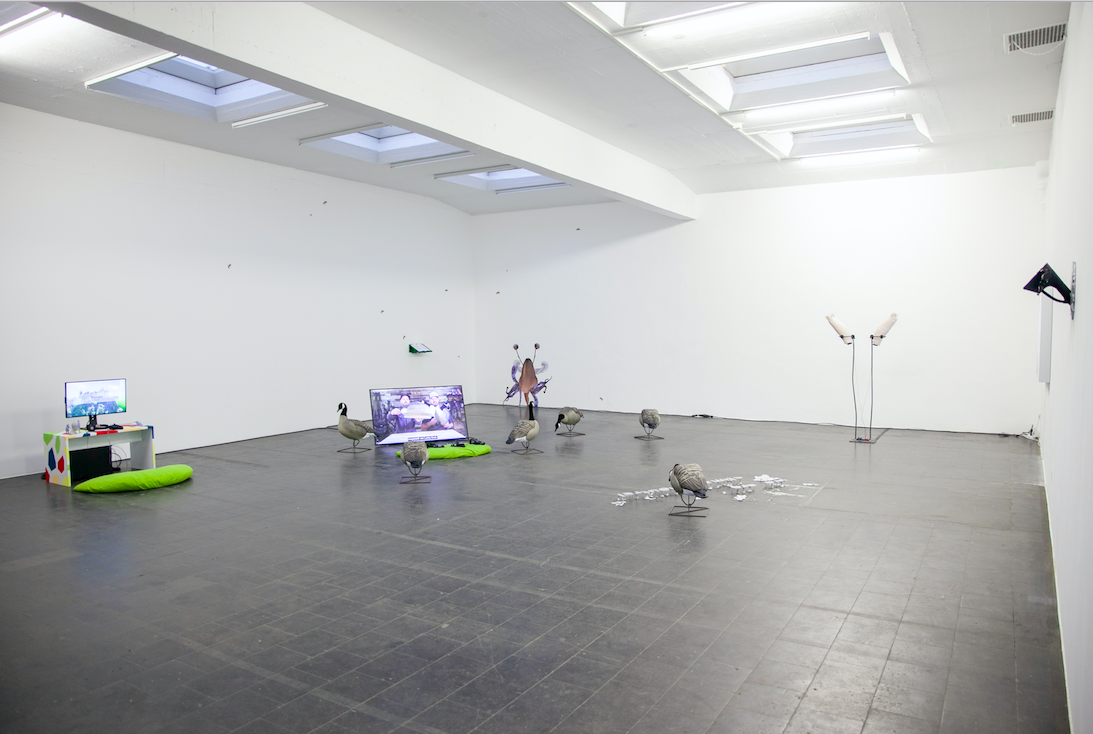 TALK TO ME - OTHER HISTORIES OF NATURE, 2022. Installationsansicht  |  Foto: Jiha Jeon 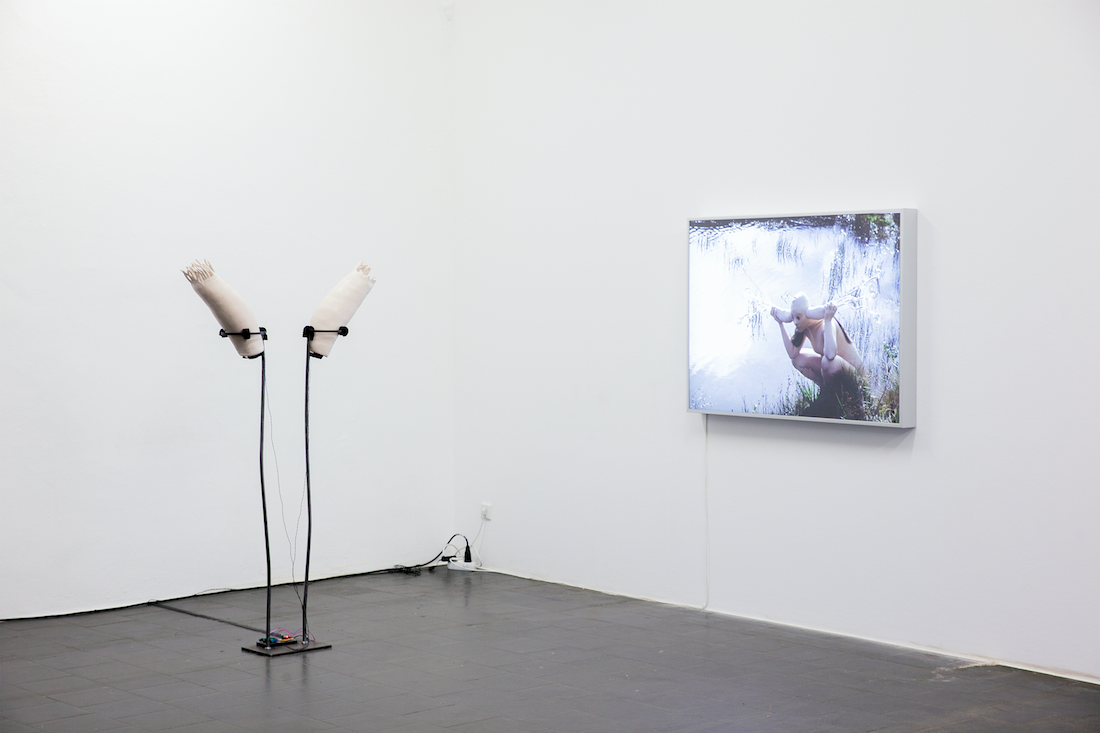 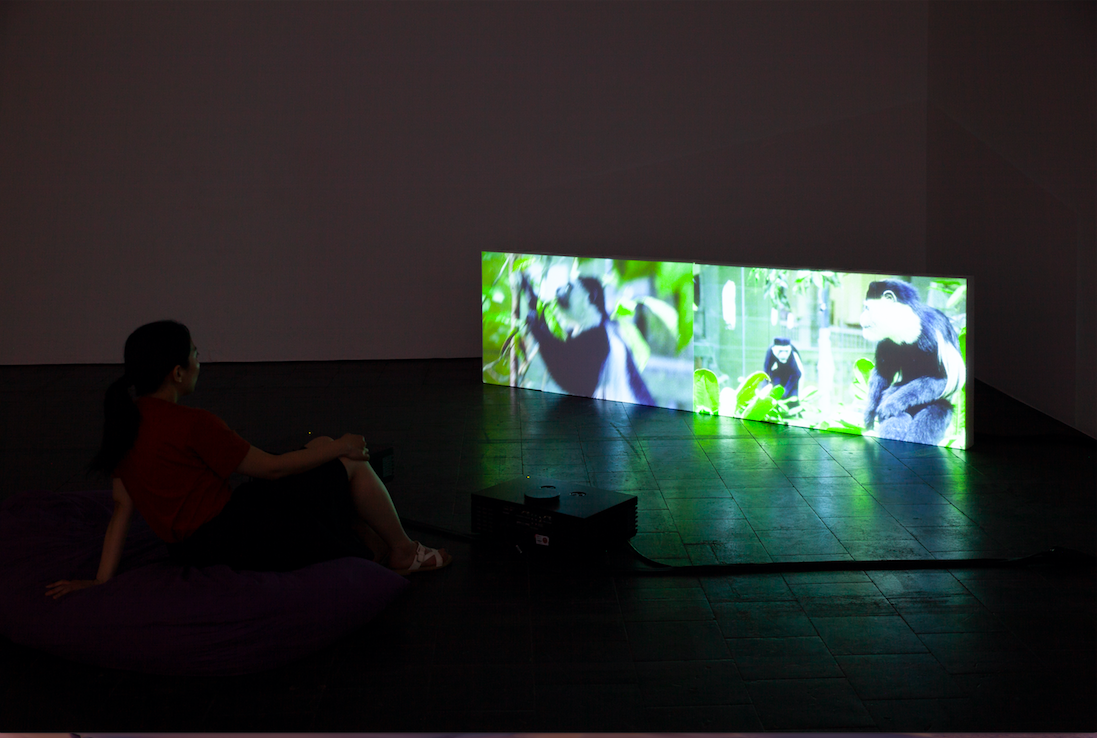 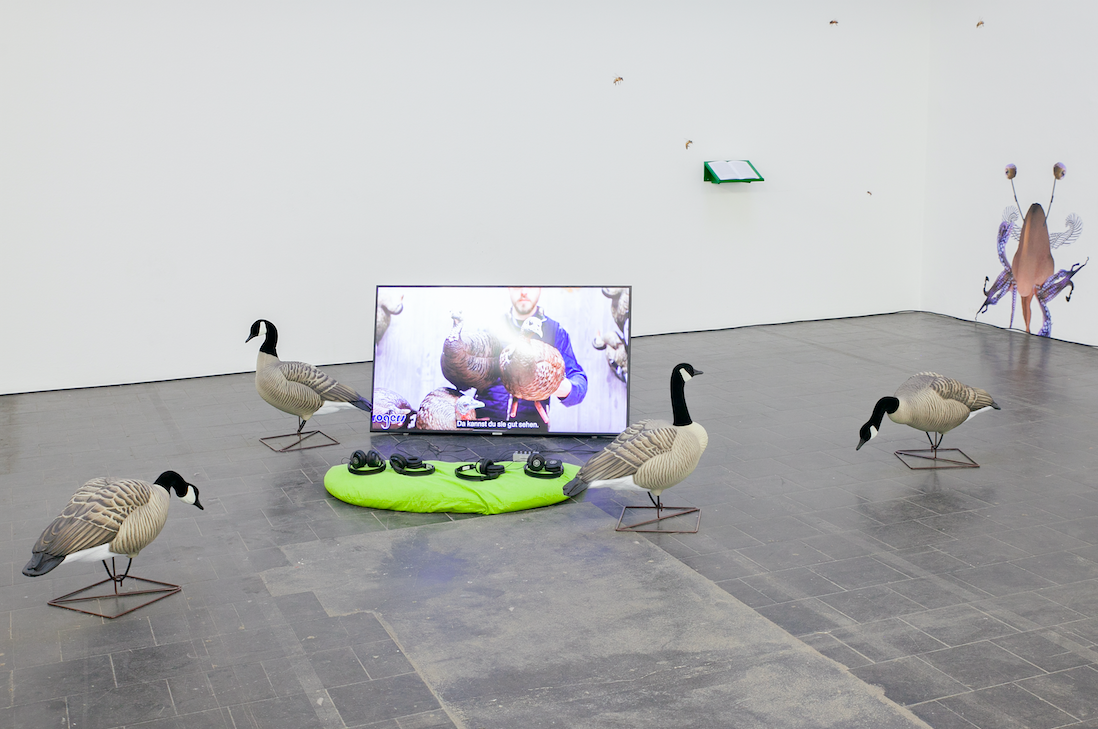 Thomas Hawranke. Wild Man has a soft Lure. TALK TO ME - OTHER HISTORIES OF NATURE, 2022  |  Foto: Jiha Jeon 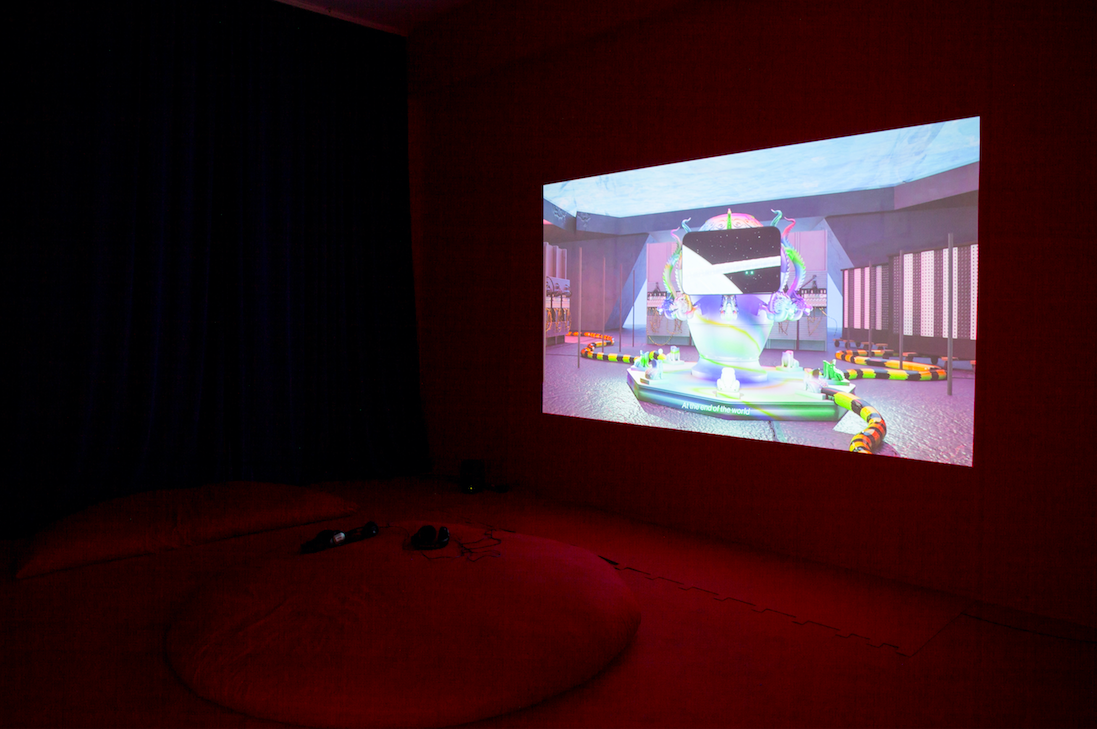 Hyeseon Jeong, Seongmin Yuk. The Backpack of Wings: Sensory Networks. TALK TO ME - OTHER HISTORIES OF NATURE, 2022  |  Foto: Jiha Jeon 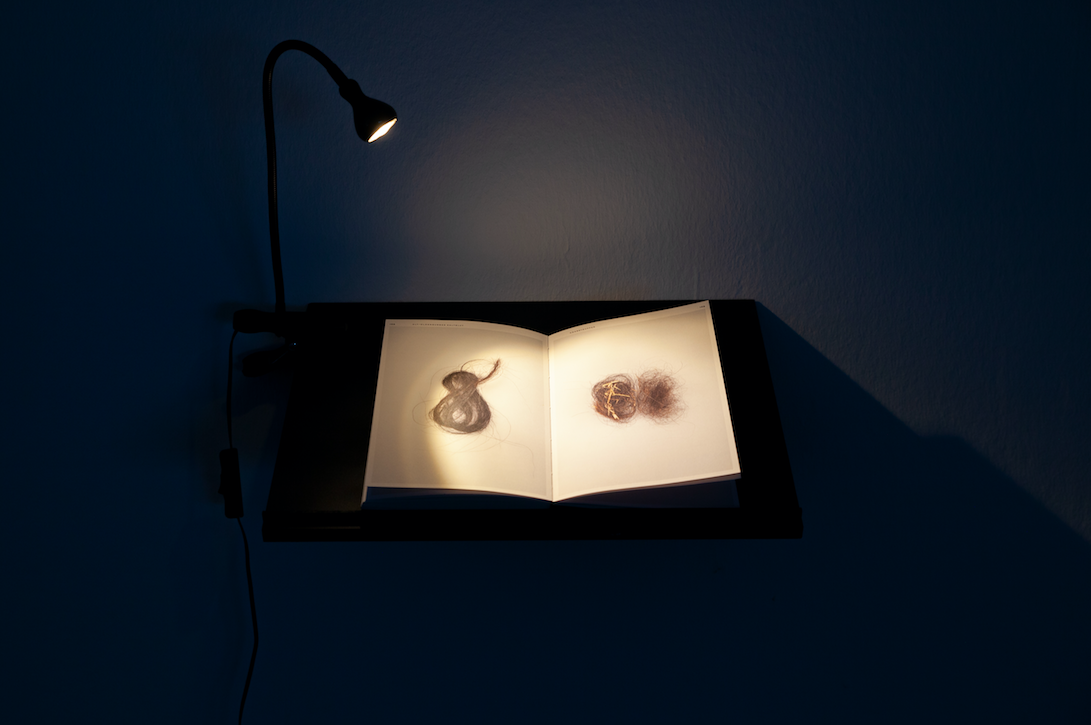